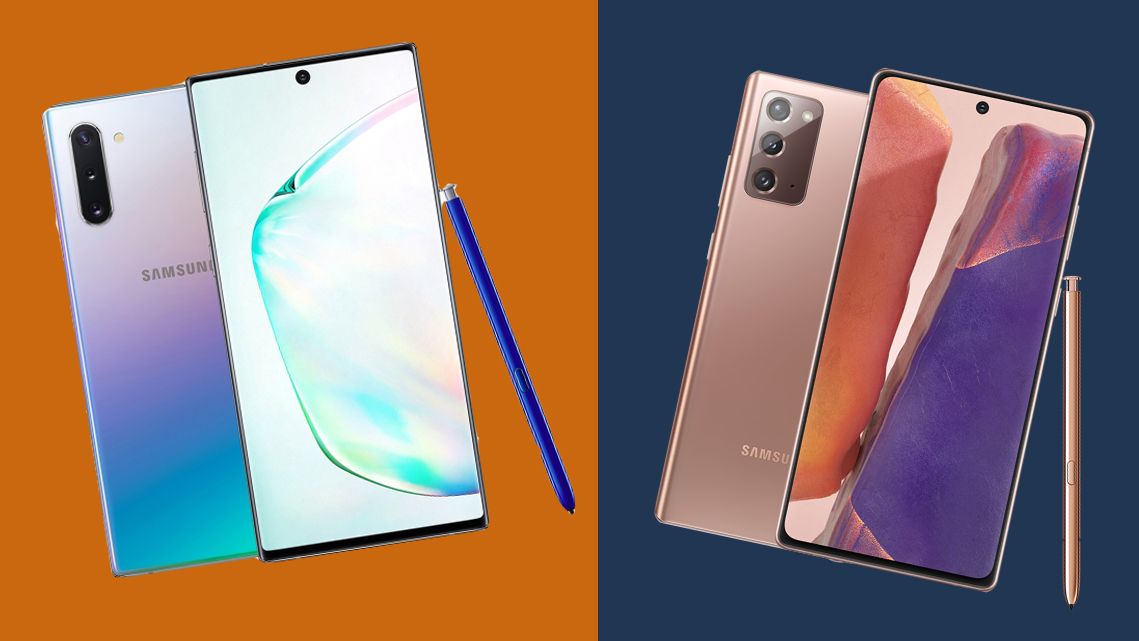 In this article we will make a comparison between the Galaxy Note 20 Ultra vs. Galaxy Note 10 Plus. The latter, launched last year, was pretty big, but this year’s makeover is even bigger. The direct successor to the Note 10 Plus offers a bigger screen, a more powerful processor, tastier camera specs, and an even bigger battery (you guessed it). Everything indicates that it should be the best Android smartphone of the moment, but is it? We compare the two phones to find out, putting the Samsung Galaxy Note 20 Ultra and the Galaxy Note 10 Plus face to face in six categories. Find out well and decide later which of these two flagships is right for you.

Being part of the same series, it is not surprising that the Samsung Galaxy Note 20 Ultra and the Galaxy Note 10 Plus look very similar. However, if you look closely at them, you will notice some subtle differences. The Note 20 Ultra departs slightly from the traditionally angular design of its predecessors (and also the Note 20), with fine curves around its edges that give it a slightly more refined appearance. It is also 2 millimeters taller and 0.2mm thicker, but this difference is not really noticeable when you hold one of the phones (both are large).

The Note 20 Ultra also has a slightly sharper and more vivid display. It has a resolution of 3,200 x 1,440, compared to 3,040 x 1,440 on the Note 10 Plus. This will give you 13 more pixels per inch than its predecessor, which doesn’t really show much. At the same time, the inclusion of a Super AMOLED screen camera provides a tangible difference in quality. When combined with the 120Hz refresh rate, it is likely to deliver a smoother and more vibrant screen experience.

Unsurprisingly, the Note 20 Ultra and Note 10 Plus come with IP68 certification. This means that they are resistant to dust and can withstand immersion in shallow water for up to 30 minutes. This colors them on an equal footing but with slight but detectable differences in the design and display area, this round goes for the Note 20 Ultra.

They may have the same amount of RAM and ROM, but the Note 20 Ultra claims a newer processor. It is equipped with Snapdragon 865 Plus in the United States (and China), while it runs on Samsung’s own Exynos 990 in the rest of the world. The S20 Ultra works with the Snapdragon 855. It is not a slow processor, but the 865 offers a small advantage that could be revealed if you run some of the latest games and applications at the same time.

That’s not to say that the Note 10 Plus can’t stand on its own. Like the Note 20 Ultra, it offers 12GB of RAM, as well as the option to upgrade from 256GB of internal memory to 512GB. As such, you may never notice that it relies on an older processor, given the uniform hardware elsewhere.

The battery is where both phones separate again. The Note 20 Ultra is powered by a 4,500 mAh battery, while the Note 10 Plus relies on a 4,300 mAh cell. It may be the case that the extra 200 mAh doesn’t make a significant difference in practice, but it could still mean that the newer phone gives users an extra hour or two of daily use. Our review of the Note 10 Plus found that it doesn’t last as long as you’d expect, especially when 4,300 mAh is already a large battery size.

On the other hand, the Note 10 Plus supports fast charging at 45W, while the note 20 Ultra only supports 25W. If there is a difference in battery life, it is likely to be offset by the ability to charge the Note 10 Plus faster than its newer stable companion. Both phones support 15W wireless charging.

This round is hard to call. The newer processor and slightly larger battery may end up giving the Note 20 Ultra superiority in this area but until we review the phone and fully test it, we’re about to call this round a draw.

Things may be close when it comes to displays and performance, but it’s clear Samsung wanted to push the Galaxy Note 20 Ultra to the limit with its camera. It has a huge 108 megapixel main camera lens, while the Note 10 Plus offers only a 12MP equivalent. Both phones feature a 12MP telephoto lens, but while the Note 20 Ultra comes with a 12MP wide-angle lens, the Note 10 Plus offers a 16MP version.

It is difficult to say whether the marked difference in size in the main wide angle lens will result in a marked difference in image quality. Our review of the Note 10 Plus indicated that it had a strong and versatile camera overall, but was a bit disappointing at times with close-ups from its main wide-angle lens. So it may be the case that the Note 20 Ultra offers an improvement in this regard, albeit without the review tests, nor can we say with true certainty.

The Note 20 Ultra allows users to record at 8K resolution and 24fps speed. In contrast, the Note 10 Plus can take you up to a maximum resolution of 4k at 60fps. This isn’t much of a difference, but it could mean that some movie buffs prefer the Note 20 Ultra for its more detailed video capabilities.

Again, this round is a bit tight. However, the Note 20 Ultra has an advantage, as the use of a 108MP wide lens is likely to solve some of the problems that prevented the Note 10 Plus’ camera from being excellent without reservation.

The Galaxy Note 20 Ultra and Note 10 Plus run on the One UI 2 operating system, which is Samsung’s customization layer based on Android 10. This is a good thing, as One UI 2 is made for high-end devices. , making it easy for users to navigate their phones and use multiple applications at the same time.

As for updates, both devices are obviously made by Samsung, which hasn’t always had the best track record of rolling out Android updates. However, they are both in the same boat here, so this round is another draw.

The Galaxy Note 20 Ultra is a standard 5G phone and will support all major 5G bands. Unfortunately, the Note 10 Plus doesn’t support 5G as standard, and customers must pay an additional $ 200 for the privilege of using faster networks.

The Note 20 Ultra has also been designed to stream Xbox games, and is considered the first smartphone to achieve this feat. It will be optimized to run console titles, and users will be able to stream around 100 games after signing up for an Xbox Game Pass at $ 15 per month. It can also be paired with an Xbox controller, making it a kind of mini console.

Other than that, both phones have a similar shape. Both come with the now familiar Note series stylus (the S Pen) and both are more designed for the higher end of the smartphone market, primarily targeting professionals and creatives who want to work (as well as play) on their phones. .

Combined with the default 5G support and Xbox streaming capabilities, this round is a decisive win for the Note 20 Ultra.

Prices for the Samsung Galaxy Note 20 Ultra start at $ 1,299. While the list of operators and retailers has not been confirmed, it will almost certainly be endorsed by the major operators and will be sold by most of the major online retailers.

In fact, the Note 10 Plus is compatible with all major carriers and is also sold by the vast majority of major online retailers. It starts from $ 1,099, while its 5G model can be had for $ 1,299.

There isn’t a big difference between the phones, but the Samsung Galaxy Note 20 Ultra is hands down the better device of the two. Its subtle design and screen updates, as well as its new special features and (probably) superior camera, result in a phone that offers more to the average user than its predecessor.

Of course, if you don’t mind going 5G-free, then the Samsung Galaxy Note 10 Plus is still a highly recommended phone. It’s at least $ 200 cheaper than its successor, and while it doesn’t have the same proverbial amount of power, it’s still a very useful and trustworthy smartphone.