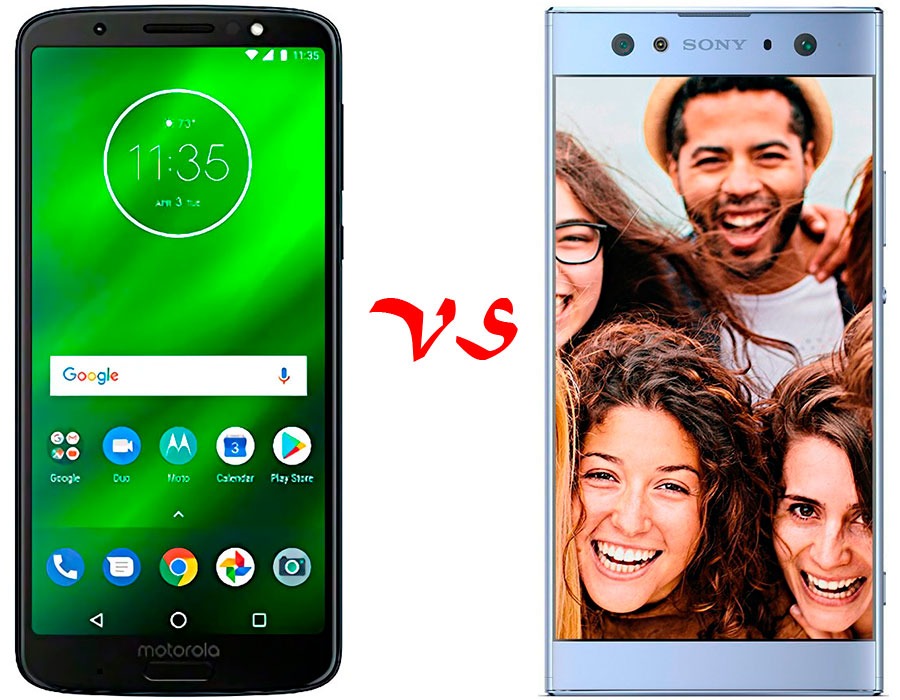 Today we face two very important models in the mid-range of the year 2018. We face the Motorola Moto G6 Plus and the Sony Xperia XA2 Ultra.

Motorola's Moto G range has always been considered one of the best in the mid-range. However, this year many devices are trying to take that position away . We have a 2018 in which we have seen several very interesting terminals with a very contained price. Today we are going to compare the Motorola Moto G6 Plus with one of those rivals.

Specifically with the Sony Xperia XA2 Ultra . The classic Sony design should not fool anyone. There are many users who like this design. And if we also add a large screen, a high resolution camera and a double front camera, we are facing a mobile very to take into account. So we are going to put two mobiles face to face that bet on a more common design in 2017 but with quite juicy technical components. We compare the Motorola Moto G6 Plus with the Sony Xperia XA2 Ultra.

We are facing two very different design proposals. The Motorola Moto G6 Plus offers a back finished in Corning Gorilla Glass . The ends end in a small curve for easy grip. Also the corners of the terminal.

At the rear, the dual camera system is striking. This, as usual in the Moto G range, is placed in the center of a circular area that protrudes from the case .

Ahead is the screen that becomes the protagonist. We have frames on the top and bottom . In the upper part we have the camera located. While the one in the lower area is somewhat larger, since it includes the fingerprint reader . This is located under a small oval button, also very characteristic of the Moto G range.

The full dimensions of the Motorola Moto G6 Plus are  160 x 75.5 x 8 millimeters, with a weight of 167 grams . The terminal is available in black and in a kind of bluish gray. On the other hand, it is worth noting that it has a  waterproof coating that helps protect the terminal from accidental splashes or fine rain.

The Sony Xperia XA2 Ultra offers the usual design to which the Japanese company has accustomed us. The rectangular design is maintained, with a completely flat back and screen . The curves are reserved for the metallic market that joins both parts and the edges of the terminal.

Its back cover is made of plastic . Although it is a quality plastic, in a terminal with a rather high price we should not have this finish. The back sports a clean design, only broken by the main camera and the fingerprint reader.

The camera is quite well integrated , although it has a silver frame that makes it stand out slightly. The fingerprint sensor also has this frame, although it is better integrated.

The sides are rounded to facilitate grip. In addition, it has a button dedicated to photography, something that few terminals have. On the front we have a side-by-side screen, but it has large upper and lower frames . The upper frame includes the dual front camera. But the lower one is totally naked.

The dimensions of the Sony Xperia XA2 Ultra are  163 x 80 x 9.5 millimeters, with a weight of no less than 221 grams . The terminal is available in black, silver and blue.

Large screens are all the rage. Any mid-range terminal already includes a 5.7-inch screen onwards. The Motorola Moto G6 Plus has a 5.9-inch IPS panel with Full HD + resolution . It offers an 18: 9 aspect ratio and is protected by Corning Gorilla Glass 3.

The Sony Xperia XA2 Ultra is equipped with a  6-inch panel . It offers Full HD resolution  and image enhancement technology. The good thing about using large frames is that the screen offers a 16: 9 format , so we will not have black stripes on the sides.

In addition, Sony allows us to modify some parameters of the screen through the software . For example, we can modify the white balance or adjust the color gamut and contrast.

We come to the photographic section. A characteristic in which, a priori, both models should stand out compared to their competitors.

The Motorola Moto G6 Plus has a dual camera system on its back. It is equipped with a 12-megapixel main sensor and f / 1.7 aperture . This is accompanied by a second 5 megapixel sensor . The camera is capable of recording in 4K resolution and includes features such as time lapse video or slow motion video.

In addition, the Moto G6 Plus has a kind of artificial intelligence . The rear camera software is capable of recognizing landmarks, objects or text to apply the correct parameters. Although, as we saw in our review of the Motorola Moto G6, it does not perform particularly well.

The front camera has an 8 megapixel sensor . This is capable of recording video with 1080p resolution at 30 fps.

The main camera of the Sony Xperia XA2 Ultra has a  23 megapixel sensor with f / 2.0 aperture and a maximum ISO of 12800 . This camera is capable of recording video with 4K resolution and even HDR, although the latter is limited to an FHD resolution at 30 fps.

It is in the front camera where Sony has decided to use a double sensor. On the one hand we have a  16 megapixel sensor and f / 2.0 aperture . It is accompanied by another 8 megapixel sensor with f / 2.4 aperture . This second sensor is a wide angle that covers up to 120 degrees . That is, they are two sensors that work separately. In addition, it also has an LED flash on the front.

Let's now see what technical set each of these terminals hides inside. Both models feature Qualcomm's Snapdragon 630 processor . It is an eight-core chip clocked at 2.2 GHz.

In addition, both the Motorola Moto G6 Plus and the Sony Xperia XA2 Ultra are equipped with 4 GB of RAM . As for storage, the Motorola terminal has 64 GB compared to 32 GB of the Sony mobile . Both models can be expanded using a MicroSD card.

The Motorola Moto G6 Plus we have not had the opportunity to test it thoroughly, so we can not talk about its real autonomy. It has a 3,200 milliamp battery with TurboPower charger .

In terms of connectivity, the Motorola terminal is equipped with a USB Type C connector . It also has 4G LTE, GPS, dual-band 802.11ac WiFi , Bluetooth 5.0 technology and NFC .

The Sony Xperia XA2 Ultra has a  3,580 milliamp battery . Although it is true that, taking into account the design, they could have included a much larger battery, the truth is that the autonomy is really good. In our in-depth test, it managed to survive the entire day without problems, even on days when we used the camera intensively.

This is demonstrated by the result of the AnTuTu test, with no less than 14,418 points. In addition, it  has a Quick Charge 3.0 fast charging system . And there is no shortage of the usual Sony Stamina modes for energy saving.

As for the connectivity of the Japanese model, it is just as updated as its rival. It has 4G LTE connectivity, GPS, WiFi, Bluetooth 5.0 with aptX and NFC . Furthermore, the charging connector is also a USB Type-C . It even has FM Radio.

As we said, the current mid-range is wonderful. It offers many of the features of high-end terminals, with a more competitive price. Obviously we will not have the best of the market, but every time we have more interesting mobiles.

The Moto G range has always been one of the most recommended when buying a mid-range terminal. And the Motorola Moto G6 Plus is no exception. Although its design is not revolutionary, it does offer some high-end details, such as the glass back .

The Sony Xperia XA2 Ultra maintains the classic Sony design, with very large front bezels. In addition, it is a fairly thick and heavy terminal. So, for our part, the winner in design would be the Motorola Moto G6 Plus . Although, as we always say, this section depends a lot on the tastes of each user.

As for the screen, we can highlight the higher resolution of the Motorola Moto G6. However, this is due to the form factor, so we could leave it in a tie .

Both terminals also tie in brute force , since both have the same technical set. Although we give a mini point to the Moto G6 Plus for including twice the storage than its rival.

And what about the photographic section? As we said, the Motorola Moto G6 Plus we have not had the opportunity to test it thoroughly. However, we have tested its little brother, the Motorola Moto G6. The result was the usual when we talk about mid-range terminals. That is to say, quite good photos in optimal light conditions, but less good when the light is scarce .

Something similar happens with the Sony Xperia XA2 Ultra. This one opts for a simple camera system with a lot of resolution. Again, in good lighting conditions the images obtained are very interesting. Perhaps we would put the Sony terminal ahead , since both suffer from the same problem and the high resolution of the Sony terminal can achieve better results.

In terms of autonomy, the Sony Xperia XA2 Ultra is very likely to be ahead . As we have mentioned, its battery offers a lot of peace of mind when using the terminal.

Finally, we must talk about the price. The Motorola Moto G6 Plus is for sale with a price of 300 euros . It's a really tight price for everything this device offers. On the other hand, the Sony Xperia XA2 Ultra has an official price of 430 euros . However, if we search well, we can get it around 370 euros. Taking this into account, which one do you prefer?